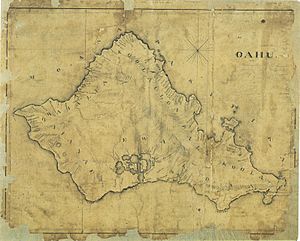 Outline of the ʻEwa District from 19th century Hawaiian map

ʻEwa was one of the original districts known as moku, of the island of Oʻahu in Ancient Hawaii history.

The word ʻewa means "crooked" or "ill-fitting" in Hawaiian. The name comes from the myth that the gods Kāne and Kanaloa threw a stone to determine the boundaries, but it was lost and later found at Pili o Kahe.

All content from Kiddle encyclopedia articles (including the article images and facts) can be freely used under Attribution-ShareAlike license, unless stated otherwise. Cite this article:
Ewa District, Hawaii Facts for Kids. Kiddle Encyclopedia.