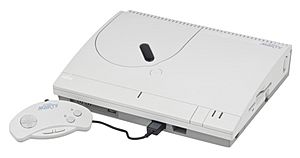 The FM Towns Marty was the world's first 32-bit game console (not the Amiga CD32, which was only in Europe and North America). It was one of the first CD-based consoles and the first made for gaming rather than high-end PC-like systems, like the Amiga CDTV and Phillips CDi. It was only released in Japan and was a commercial failure, but despite this, it was made until 1999 – longer than the average games console.

All content from Kiddle encyclopedia articles (including the article images and facts) can be freely used under Attribution-ShareAlike license, unless stated otherwise. Cite this article:
FM Towns Marty Facts for Kids. Kiddle Encyclopedia.