Fairbanks is a community along U.S. Highway 290 and the Southern Pacific Railroad in Western Houston, Texas, United States. At one point it was a distinct unincorporated area within Harris County.

The community, named after its founder, John Joseph Fairbanks, was founded in July, 1895. In 1895 Fairbanks received its first post office. In 1914 Fairbanks had 75 residents, a general store and saloon, and a grocery store. The community had 25 people in the 1920s and 1930s. In 1942 the community had 800 residents and 35 businesses in the area. In the 1950s the population decreased to 350 people. Houston annexed Fairbanks in 1956. The community began to expand around that period; in the 1960s the Fairbanks area and some surrounding communities had 1,050 residents and 45 businesses. In 1980 and 1990 1,050 people lived in Fairbanks, while more people lived in the surrounding area. 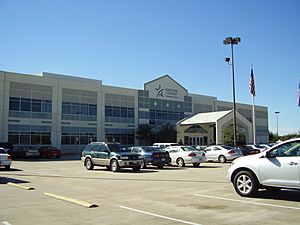 Fairbanks is within the Cypress-Fairbanks Independent School District.

All content from Kiddle encyclopedia articles (including the article images and facts) can be freely used under Attribution-ShareAlike license, unless stated otherwise. Cite this article:
Fairbanks, Houston Facts for Kids. Kiddle Encyclopedia.