The Fairgrove Avenue Historic District is a residential historic district located along Fairgrove Avenue, between North Saginaw and Edison Streets, in Pontiac, Michigan. It was listed on the National Register of Historic Places in 1985.

Pontiac was founded in 1818, and residential development soon spread west and north of the downtown area. The portion of the city that is now this district was originally owned by the Oakland County Agricultural Society, and used as a fairground, with the county fair held at this location starting in 1850. The fairgrounds was used to train and muster troops during the Civil War. In 1895, The Agricultural Society purchased another section of land, and platted the older fairgrounds for residential development, creating, among others, Fairgrove Avenue. By 1904, nearly three-quarters of this district along Fairgrove had been developed, and by 1920 development was complete.

The Fairgrove Avenue Historic District is a single block long, containing 28 turn-of-the-century middle-class homes on relatively small lots. The street is lined with shade trees, and the block is completely full save for one vacant lot where a fire damaged house was demolished. The district also includes a stone marker on the corner of Fairgrove and N. Saginaw that commemorates the Civil War use of the fairground.

Most of the houses were constructed between 1895 and 1920, with the majority constructed before 1910. Architectural styles of the structures range from Colonial Revival to Queen Anne. The houses are all 2-1/2 stories, and uniform in scale and setback, and almost all have large front porches. Nealy all are single-family homes, with the exception of two duplexes in the neighborhood, and a few structures that have been converted into apartments. 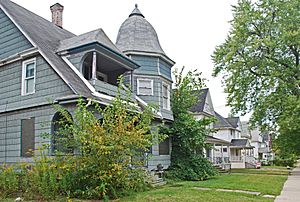 South side of Fairgrove, just west of Lexington

All content from Kiddle encyclopedia articles (including the article images and facts) can be freely used under Attribution-ShareAlike license, unless stated otherwise. Cite this article:
Fairgrove Avenue Historic District Facts for Kids. Kiddle Encyclopedia.