Fairlight Glen lies about 2 miles (3.2 km) east of the fishing port of Hastings and 1.5 miles (2.4 km) west of the small village of Fairlight Cove on the East Sussex coast. It is a wooded area forming part of the Hastings country park and leading down to Covehurst Bay. This is a naturist beach, but is shared by non-naturist visitors. The name Covehurst Bay is not normally used for the beach, but is marked on OS maps.

The beach is mainly shingle with large boulders and some patches of sand, particularly at low tide. The main cove lies between lower cliff areas formed in major cliff collapses some time in the past. There are no facilities or buildings of any kind on the beach, nor in the country park on the cliffs above. The harbour arm of Hastings is just visible at low tide, as is the nuclear power station at Dungeness a few miles further east. 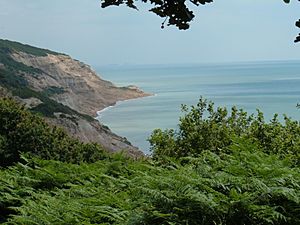 It can be reached by walking from Hastings along the hilly clifftop path until a signpost points out a pathway leading down the cliff to the cove. Immediately north of the beach is Hastings country park where parking is available after a steep 20 minute walk. Further to the east along the clifftop is a coastguard station and alternative parking for visitors to the park. It is normally possible to walk along the beach to Hastings, but this may be cut off at high tide; the journey is an arduous one, involving extensive walking on loose pebbles and the debris from cliff falls. It may be possible at low tide to walk east along the beach to Fairlight Cove. 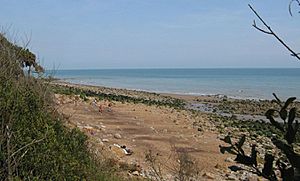 The 100 ft (30 m) high cliffs are sandstone and clay which is subject to erosion. Access to the beach is partially obstructed by a fence accompanied by a warning notice about cliff falls. This was erected when the original wooden steps were swept away in such a fall. Alternative steps have been cut into the path by users; as of July 2011 the path was safe to walk, but the visitor should be prepared for a bit of a climb. Water quality had been indifferent in the past but work to local drainage systems has improved this. Anyone contemplating swimming should be aware of hidden rocks and the absence of lifeguards or normal rescue services. Occasionally people have been rescued by helicopter from the beach or cliffs.

All content from Kiddle encyclopedia articles (including the article images and facts) can be freely used under Attribution-ShareAlike license, unless stated otherwise. Cite this article:
Fairlight Glen Facts for Kids. Kiddle Encyclopedia.