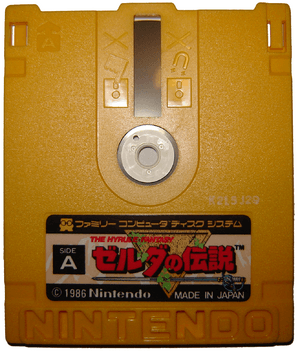 A Zelda no Densetsu disk card.

The Family Computer Disk System was a disc add-on for the Nintendo Entertainment System that was only released in Japan despite being announced in America. It used floppy disks which made it very easy for piracy to occur.

All content from Kiddle encyclopedia articles (including the article images and facts) can be freely used under Attribution-ShareAlike license, unless stated otherwise. Cite this article:
Family Computer Disk System Facts for Kids. Kiddle Encyclopedia.