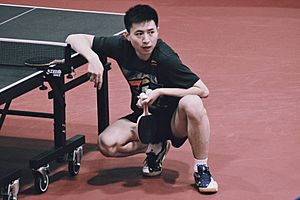 2009 he took part in the Youth- worldchampionships, where he won all four titles (Singles, Doubles, Mixed and Team).

2015 he became vice-world champion. He beat amongst other things Xu Xin and Zhang Jike, but he lost in the final to Ma Long.

All content from Kiddle encyclopedia articles (including the article images and facts) can be freely used under Attribution-ShareAlike license, unless stated otherwise. Cite this article:
Fang Bo Facts for Kids. Kiddle Encyclopedia.