Fantasy Glades was a small theme park which operated until 28 April 2002 in Port Macquarie, Australia. The park operated for 35 years in its rainforest setting, catering to a child-friendly clientele.

Fantasy Glades was opened in 1968 by George and Rosemary Whitaker. In 1986, the park was sold to The Spry family and Brian Hutchinson, who operated the park until its closure in 2002. Some of the rides and attractions have since been purchased by Tony Williams who has plans to reopen the park in a new location on the Hastings River. As of 2006, this idea appears to be on hiatus.

On 17 March 2008, the parkland became available to buy. The parkland is the only landsite of its kind in the beach side area of Port Macquarie.

Shane and Karen Hay of Queensland purchased the Fantasy Glades property in 2009 with the intent of re-opening the park in the near future, pending the necessary council approvals and funds permitting.

The Fantasy Glades site was purchased by Jeff Crowe in 2015. It is currently undergoing renovation and Council Approval processes with the aim of creating new environmentally friendly accommodation options for tourist's and traveler's to the Port Macquarie Region. 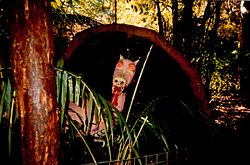 All content from Kiddle encyclopedia articles (including the article images and facts) can be freely used under Attribution-ShareAlike license, unless stated otherwise. Cite this article:
Fantasy Glades Facts for Kids. Kiddle Encyclopedia.