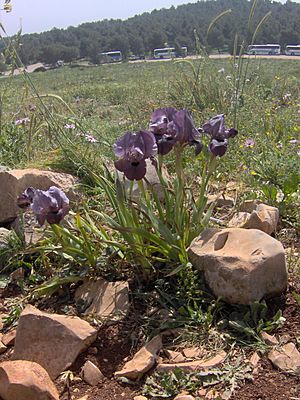 Gilboa Iris or Faqqu’a Iris (Iris haynei) is a species in the genus Iris, subgenus Iris subgenus and section (botany) Oncocyclus. It is a rhizomatous perennial, from the shrublands and mountainsides of Palestine.

It is written in Arabic as سوسن فقوعة. It was originally found in Palestine, on Mount Gilboa, by Hayne in April 1872, and then it was first published and described by John Gilbert Baker in The Gardeners' Chronicle Vol.6 on page 710 in 1876. This description was based on dried samples of plants that Haynes had originally found.

It is native to temperate to Western Asia.

On 5 April 2016, the Ministry of Environmental Affairs (Palestine) had adopted 'Sawsan Gilboa' (I. haynei) as the national plant of the State of Palestine, to go with the Olive tree (as the national tree), Mountain gazelle (national animal), Palestine sunbird (national bird) and the 5th of March to be the national day for the Palestinian environment.

All content from Kiddle encyclopedia articles (including the article images and facts) can be freely used under Attribution-ShareAlike license, unless stated otherwise. Cite this article:
Faqqu’a Iris Facts for Kids. Kiddle Encyclopedia.