Farhiyo Farah Ibrahim (Arabic language: فرحيو فرح إبراهيم) is a Somali refugee and women’s rights activist. She fights against female mutilation and forced marriage in the Dadaab refugee camp in north-east Kenya. In 2008, she received the International Women of Courage Award.

In 2002 Farah went to work for the National Council of Churches in Kenya, teaching people about reproductive health. After she was attacked, she took a job as an interpreter in Dadaab.

In 2005 Farah went to a leadership program in the town of Naivasha in Western Kenya. Then she worked for CARE, giving people information about reproductive health. CARE is an international NGO that helps refugees. 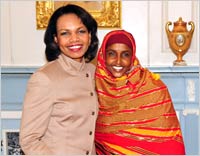 All content from Kiddle encyclopedia articles (including the article images and facts) can be freely used under Attribution-ShareAlike license, unless stated otherwise. Cite this article:
Farhiyo Farah Ibrahim Facts for Kids. Kiddle Encyclopedia.