Kids Encyclopedia Facts
Not to be confused with Farm Loop, Alaska. 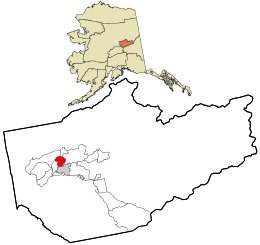 Location within Fairbanks North Star Borough and the state of Alaska

Farmers Loop is a census-designated place in Fairbanks North Star Borough, Alaska, United States, one of several CDPs created out of various Fairbanks suburbs and outskirts during the 2010 census, at which time it had a population of 4,853. The CDP is located due north of Fairbanks and is centered on and named for Farmers Loop Road, a road that runs along the foothills north of Fairbanks between the Steese Highway and the northeastern corner of the University of Alaska Fairbanks campus.

All content from Kiddle encyclopedia articles (including the article images and facts) can be freely used under Attribution-ShareAlike license, unless stated otherwise. Cite this article:
Farmers Loop, Alaska Facts for Kids. Kiddle Encyclopedia.