Fasciola hepatica (also known as the common liver fluke) is a parasitic trematode (fluke or flatworm) in the phylum Platyhelminthes.

It infects the livers of various mammals, including humans. The disease caused by the fluke is called fascioliasis. It has been classified as a neglected tropical disease.

F. hepatica is distributed worldwide, and has been known as an important parasite of sheep and cattle for hundreds of years. It causes great economic losses in sheep and cattle. Because of its size and economic importance, it has been the subject of many scientific investigations and may be the best-known of any trematode species. 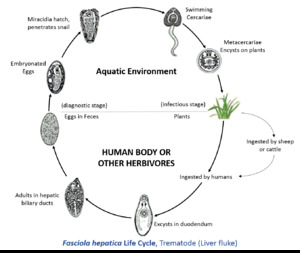 All content from Kiddle encyclopedia articles (including the article images and facts) can be freely used under Attribution-ShareAlike license, unless stated otherwise. Cite this article:
Fasciola hepatica Facts for Kids. Kiddle Encyclopedia.