Fashion History Museum is a museum in Cambridge, Ontario, Canada, which chronicles the history of fashion. It was founded in 2004 by Jonathan Walford and Kenn Norman. The museum is a non-profit charitable organization. 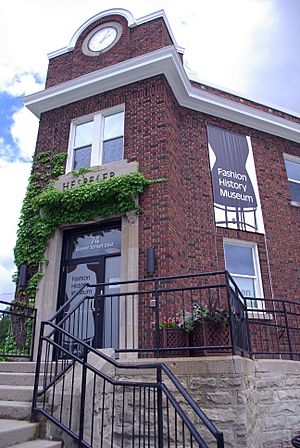 Prior to founding the Fashion History Museum, Jonathan Walford had been the founding curator of the Bata Shoe Museum. Walford has been collecting historical fashions since the 1970s, finding pieces from auction houses, garage sales, and even rescuing some items from the trash. He has also written several books on fashion.

Walford is currently the museum's Director/Curator. The museum's other founder, Kenn Norman, who serves as the Chair of the museum's board, has a background in finance, project management and design.

For the first ten years of its existence the museum lacked a permanent gallery, so it created exhibitions that travelled around Canada and the world, from Hong Kong to Bahrain. A pilot gallery in a mall in Cambridge Ontario, in 2013 saw almost 8000 visitors in the four and a half months the museum was open there.

In June 2015 the museum opened in a 3,000 square foot decommissioned post-office that had been opened in 1929 in the former town of Hespeler, now a neighbourhood of Cambridge. The museum retained and restored the original terrazzo floors and installed replicas of antique light fixtures for lighting. A restoration project for the clock over the museum's front doors was funded by the public. The town of Cambridge was once a textile manufacturing hub, making the museum a suitable fit with the town's history.

The museum's collection encompasses over 10,000 items. These items range from what may be the oldest existing European shoe worn in North America (it was reputedly worn in New Amsterdam and dates to about 1660), to dresses by Hollywood designer Adrian (Adolph Greenberg) to 1970s handbags made from cigarette packs.

The present gallery space opened June 27 with the following exhibitions: 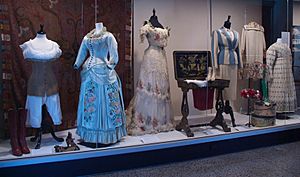 Image of the Treasures from the Collection exhibit 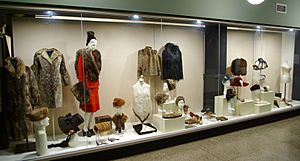 Image of the Wild and Rare exhibit

All content from Kiddle encyclopedia articles (including the article images and facts) can be freely used under Attribution-ShareAlike license, unless stated otherwise. Cite this article:
Fashion History Museum Facts for Kids. Kiddle Encyclopedia.