Fatma Boussaha (Arabic: فاطمة بوساحة‎code: ar is deprecated ) (born January 22 1942 in Zaghouan - died October 27 2015) was a Tunisian Mezwed singer. Fatma Boussaha performed several titles like Ya ami echiffour (Hey my uncle the driver) and Ya karhebt Kamel (Hey the car of Kamel). She was known for her song Achchibani wassa (Laisse passer le Vieuxard) in 1999. Her last title, Trabek ghali ya touness, (Your dust is precious, Tunis) dates from 2012. At one time, she was banned from broadcasting on Tunisian television as were other mezoued artists. Boussaha died on Tuesday October 27, 2015 at her home.

At the end of her life, touched by cancer, she found herself alone facing her fight, leading the Ministry of Culture to take charge of her care within the framework of her program of assistance to artists. 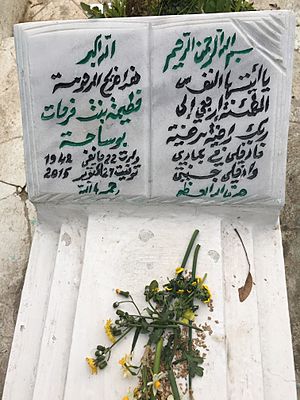 All content from Kiddle encyclopedia articles (including the article images and facts) can be freely used under Attribution-ShareAlike license, unless stated otherwise. Cite this article:
Fatma Boussaha Facts for Kids. Kiddle Encyclopedia.