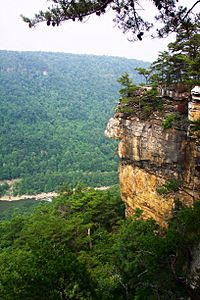 A section of the cliff at Endless Wall in New River Gorge.

The life zones of West Virginia allow for a diversity of habitats for fauna (animal life), varying from large lowland farming valleys bordered with forest and meadow to highland ridge flats and heavy forestland, some with rocky ridge-line peaks. The "Mountain State" harbors at least 56 species and subspecies of mammals. The state has more than 300 types of birds and more than 100 species of fish.

Many common insects of the Eastern United States can be found in West Virginia; 15 species of beetles, more than 70 species of odonate, 12 species of stonefly, and about 17 moth species. Other invertebrates include some 18 species of spider and a little over seven dozen species of cave-dwellers. The West Virginia Division of Wildlife (WVDNR) uses hunting and fishing license fees for wildlife habitat conservation. The state has guidelines for persons applying for West Virginia scientific collecting permits. 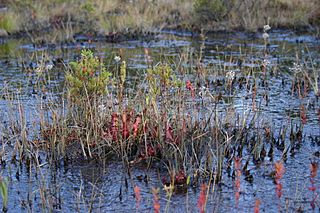 Deep in the heart of the state's mountains is a unique natural botanical treasure. Along with very rare boreal plants, several species of orchids and carnivorous plants are found at Cranberry Glades Botanical Area. It provides a chance for the public to see mink, beavers, snowshoe hare, black bear with its unique flora and other fauna. Cranberry Glades is the southern-most breeding pocket for some northern breeding species of birds like the purple finch and the northern waterthrush. West Virginia's western valley contrasts the mountains with another natural treasure, the Ohio River Islands National Wildlife Refuge. These islands serves as a habitat for great blue heron, wood ducks, cormorants, Canada geese, migrating loons, and tundra swans.

The state of West Virginia is currently home to at least 70 wild mammal species. The larger megafauna which once inhabited the High Alleghenies — elk, bison, mountain lion — were all exterminated during the 19th century. They survived longer in this area, however, than in other parts of the eastern United States. Naturalist John James Audubon reported that by 1851 a few eastern elk (Cervus canadensis canadiensis) could still be found in the Alleghany Mountains of what became West Virginia, but that by then they were virtually gone from the remainder of their range.

Some West Virginia mammals have thrived despite human disturbance, and include the opossum, which is more abundant and more widely distributed due to human activities. Also doing well are mammals that prefer farm and early successional habitats. The coyote is expanding its range eastward in the United States and now occurs throughout the state.

Many examples of West Virginia's present and former megafauna are on display at the West Virginia State Wildlife Center, a small zoo featuring native animals. 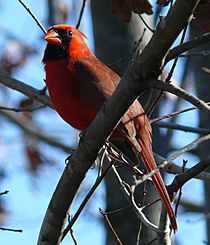 North American migrant birds such as the tufted titmouse, scarlet tanager, brown thrasher, American robin, and humming bird live throughout the warmer seasons, except in the highest peaks. Some Icterid birds visit West Virginia, as well as the hermit thrush and wood thrush. The American goldfinch, northern cardinal, bluejay, catbird, northern mockingbird, American sparrow, some wrens, and even crows can be found passing through urban lawns to meadows and cattail ponds or a farmer's field.

Major game birds are the duck, goose, bobwhite quail, ruffed grouse, and wild turkey. Pairs of buzzards can be seen while driving along the open highway. The sandhill crane lumbers at flight over the large rivers to conservation ponds. Occasionally, osprey and golden eagle can be found watching over or snatching a fish on remote lakes and larger streams. Hawks and owls are the most common birds of prey.

West Virginia has over twenty species of lizard, skink, turtle, and snake. While the moccasin can be seen crossing over brooks and along larger rivers, the timber rattlesnake is found among rocks and fallen tree in the highland forests and mountainous areas. The copperhead is the most common poisonous snake throughout the state.

Green Snakes, Rat or Barn Snakes and Garden Snakes are examples of non-venomous snakes seen across the hollows and wide bottoms along the major rivers, sharing habitat with the copperhead. Painted turtles live in most ponds and brooks. These and major rivers also hold snapping turtles, hunted as a delicacy with a WVDNR permit. The box turtle is found in nearly every meadow and wood.

During the early half of the 20th century, the West Virginia Department of Resources accidentally hatched a somewhat golden rainbow trout. This excitement in the state hatchery fueled the effort to produce the West Virginia "golden rainbow trout." Some anglers claim the state received a golden trout from the west to help culture this. Just the same, today's "goldy" was developed from breeding-back to rainbow trout. As the case may be expected, these special fish are very aggressive fighters and excellent tablefare.

Amphibian species in West Virginia number about twenty one. Among them are hellbenders and salamanders, as well as toads and frogs such as the northern leopard frog and mountain chorus frog.

Many common insects of the Eastern United States can be found in West Virginia including aquatic insects. The state's beetle number about 15 species. There are more than 70 species of odonate, about 18 species of spiders and a dozen species of stonefly. There are about 17 moth species. Of the wasps, some meadows may have a burrow of yellowjackets. The forest can hold a hive of hornets hanging from a branch. Sweat bee and mosquito are no stranger to the shaded wet-land which delights the sunfish and catfish in nearby deeper pools. West Virginia trout has but one mayfly on which to feed. It is the West Virginia burrowing mayfly (Ephemera triplex) along with the mountain stream's terrestrials and the other insects. The Mountain State's warmer season's flora glitter with about two and a half dozen species of butterfly.

Gastropoda, slugs, leech, earthworms and grub worm otherwise larva are among the common invertebrate in West Virginia. The state's streams and lakes provides habitat for about 54 species of mussel which are protected from harvest by WVDNR.

Crayfish amount to eight different species in the stream both above and below ground. The cave crayfish (Cambarus nerterius) is endemic to caves within the Greenbrier and Elk River drainages in West Virginia for example. There are a little over seven dozen cave invertebrate in the state. Of these to example, the Madison Cave isopod (Antrolana lira) has a conservation threatened ranking priority one and lives on the Shenandoah and Potomac rivers area.

There are eleven species of land snails. The flat-spired three-toothed land snail (Triodopsis platysayoides) is listed as a threatened priority one according to the U.S. Fish and Wildlife Service. A recent estimate has only 84 of these snails living on the Cheat Mountain Watershed.

All content from Kiddle encyclopedia articles (including the article images and facts) can be freely used under Attribution-ShareAlike license, unless stated otherwise. Cite this article:
Fauna of West Virginia Facts for Kids. Kiddle Encyclopedia.