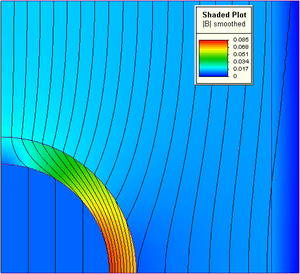 This is an example of a 2D finite element modelling solution for a cylindrically shaped magnetic shield.

The finite element method (FEM) is a numerical method of solving systems of differential equations. They are used extensively in many fields of engineering because they require very little knowledge of mathematics beyond basic algebra to use. It belongs to the Methods of Weighted residuals in that the problem is formulated such that some conditions are satisfied exactly, while others are satisfied only approximately or numerically (i.e., the "residual" being the difference between the exact solution and the approximate solution is weighted and minimized to get the best approximation).

While the ease of setting up a problem using finite elements and getting a solution is the reason for its popularity, it is also the cause of its frequent misuse and distrust of the answers obtained. Usually you have to check your results with an experiment before your model is acceptable for use. It is the author's observation that the use of finite elements in structural analysis is in particular poorly managed. Engineers typically begin working with FEM having very little knowledge of numerical methods or knowledge of finite element behavior. There are no standards and guidelines for modeling and few managers who understand well enough to regulate modeling. It has led to mistrust of the method, its arrested development, and some very bad analysis being performed that is copied by others. Much aircraft structural design is analyzed using FEM.

All content from Kiddle encyclopedia articles (including the article images and facts) can be freely used under Attribution-ShareAlike license, unless stated otherwise. Cite this article:
Finite element method Facts for Kids. Kiddle Encyclopedia.