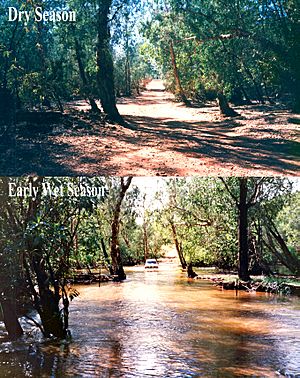 The Finniss River was named by Frederick Litchfield after Colonel Boyle Travers Finniss who was appointed Government Resident of the Northern Territory in 1864.

The Finniss River is well known as a popular fishing spot to catch the famous and highly prized catching and eating fish the Barramundi. Until July 1979 the river was also the home of Sweetheart, a 17 foot long saltwater crocodile. After Sweetheart died he was preserved and is exhibited in Darwin at the Museum and Art Gallery of the Northern Territory.

All content from Kiddle encyclopedia articles (including the article images and facts) can be freely used under Attribution-ShareAlike license, unless stated otherwise. Cite this article:
Finniss River (Northern Territory) Facts for Kids. Kiddle Encyclopedia.