Fire of Manisa facts for kids

The Fire of Manisa refers to the burning of the city of Manisa in Turkey by the Greek army. It happened during the Greco Turkish War of 1919-1922. The town was burned between 5 and 8 September 1922. More than 10,000 buildings were destroyed. This was about 90 percent of the town. Thousands of people died in the flames or were shot dead by the Greeks. 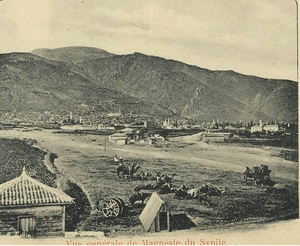 General view of the town before the fire.

The town of Manisa was part of the Ottoman Empire. Turks and Greeks were living there together. The Greeks wanted Manisa to become part of Greece. In May 1919 a Greek army occupied the town. Then there was war between Greeks and Turks for three years. In the summer of 1922 Turks defeated the Greeks. The Greeks fled to the Aegean Sea to be transferred to Greece. During their retreat the Greeks burned towns and villages of Turks. Manisa too was burned down. The local Turks fled to the mountains. Most of the town was destroyed and later rebuilt. Some Turkish authors wrote about their experiences in Turkish literature.

All content from Kiddle encyclopedia articles (including the article images and facts) can be freely used under Attribution-ShareAlike license, unless stated otherwise. Cite this article:
Fire of Manisa Facts for Kids. Kiddle Encyclopedia.