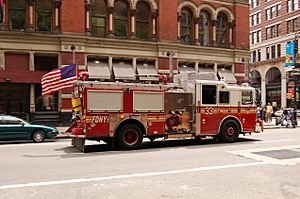 Engine 33 on Broadway near the station on Great Jones Street

10 of the 14 firefighters from this house who responded to the World Trade Center were killed in the September 11 attacks.

The first engine kept at 42 Great Jones was powered by steam and built by Clapp & Jones Manufacturing Company, Hudson, New York. It was able to throw water 215 feet.

All content from Kiddle encyclopedia articles (including the article images and facts) can be freely used under Attribution-ShareAlike license, unless stated otherwise. Cite this article:
Firehouse, Engine Company 33 and Ladder Company 9 Facts for Kids. Kiddle Encyclopedia.