The first-move advantage in chess is the advantage of the player (White) who makes the first move in chess. Statistics of results on chess databases include almost all published games since 1851. In all forms of statistics, White scores better than Black for the main four opening moves 1.e4, 1.d4, 1.c4 and 1.Nf3.

Since about 1889, when World Champion Wilhelm Steinitz addressed this issue, the overwhelming consensus has been that a perfectly played game would end in a draw.

Recent sources indicate that White scores about 54 to 56 percent. In 2005, GM Jonathan Rowson wrote that "the conventional wisdom is that White begins the game with a small advantage and, holding all other factors constant, scores approximately 56% to Black's 44%".p193 International Master (IM) John Watson wrote in 1998 that White had scored 56% for most of the 20th century, but that this figure had recently slipped to 55%.p231 The website ChessGames.com holds regularly updated statistics on its games database. On March 17, 2008 the database contained 460,703 games. White won 36.81%, 36.50% were drawn, and Black won 26.69%, resulting in a total White winning percentage of 55.06%. 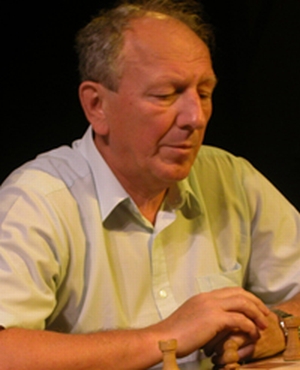 Joseph Bertin wrote in his 1735 textbook The Noble Game of Chess, "He that plays first, is understood to have the attack". This is consistent with the traditional view that White, by virtue of the first move, begins with the initiative and should try to extend it into the middlegame, while Black should strive to neutralize White's initiative and attain equality.p89 Because White begins with the initiative, a minor mistake by White generally leads only to loss of the initiative, while a similar mistake by Black may have more serious consequences. Thus, Sveshnikov wrote in 1994, "Black players cannot afford to make even the slightest mistake ... from a theoretical point of view, the tasks of White and Black in chess are different: White has to strive for a win, Black – for a draw!"

The view that a game of chess should end in a draw given best play prevails. Even if it cannot be proved, this assumption is considered "safe" by Rowson and "logical" by Adorján. Watson agrees that "the proper result of a perfectly played chess game ... is a draw. ... Of course, I can't prove this, but I doubt that you can find a single strong player who would disagree. ... I remember Kasparov, after a last-round draw, explaining to the waiting reporters: 'Well, chess is a draw' ". World Champion Bobby Fischer thought that was almost definitely so.

Modern writers often think of Black's role in more dynamic terms than merely trying to equalize. Rowson writes that "the idea of Black trying to 'equalize' is questionable. I think it has limited application to a few openings, rather than being an opening prescription for Black in general".p227 Evans wrote that after one of his games against Fischer, "Fischer confided his 'secret' to me: unlike other masters, he sought to win with the black pieces from the start. The revelation that Black has dynamic chances and need not be satisfied with mere equality was the turning point in his career, he said".p91 Watson surmised that Kasparov, when playing black, bypasses the question of whether White has an opening advantage "by thinking in terms of the concrete nature of the dynamic imbalance on the board, and seeking to seize the initiative whenever possible".p231 Watson observes that "energetic opening play by Black may ... lead to a position so complex and unclear that to speak of equality is meaningless. Sometimes we say 'dynamically balanced' instead of 'equal' to express the view that either player is as likely as the other to emerge from complications with an advantage. This style of opening play has become prevalent in modern chess, with World Champions Fischer and Kasparov as its most visible practitioners".

Modern writers also question the idea that White has an enduring advantage. Suba, in his influential 1991 book Dynamic Chess Strategy, rejects the notion that the initiative can always be transformed into an enduring advantage. He contends that sometimes the player with the initiative loses it with no logical explanation, and that, "Sometimes you must lose it, just like that. If you try to cling to it, by forcing the issue, your dynamic potential will become exhausted and you won't be able to face a vigorous counter-attack". Rowson and Watson concur. p219p239 Watson also observes, "Because of the presumption of White being better, the juncture of the game at which Black frees his game or neutralizes White's plans has often been automatically assumed to give him equality, even though in dynamic openings, the exhaustion of White's initiative very often means that Black has seized it with advantage".p232

In chess tournaments and matches, the frequency with which each player receives white and black is an important consideration. In matches, the players' colours in the first game are determined by drawing lots, and alternated thereafter. p11 In All-play-all round robin tournaments with an even number of players, each receives one extra white or black. The double-round robin tournament is considered to give the most reliable final standings, since each player receives the same number of whites and blacks, and plays both white and black against each opponent.p56

In Swiss system tournaments, the tournament director tries to ensure that each player receives, as nearly as possible, the same number of games as white and black, and that the player's colour alternates from round to round.

All content from Kiddle encyclopedia articles (including the article images and facts) can be freely used under Attribution-ShareAlike license, unless stated otherwise. Cite this article:
First-move advantage Facts for Kids. Kiddle Encyclopedia.