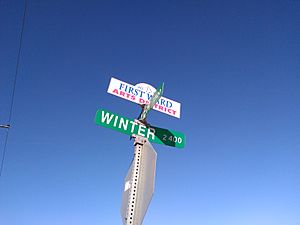 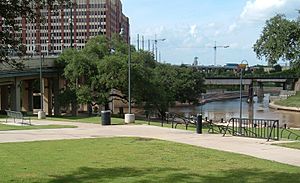 Allen's Landing park at Buffalo Bayou and White Oak in the First Ward.

The First Ward of Houston, which is located inside the 610 Loop, is one of the city's historic wards. It was originally the center of the business district for the city, and was strategically located at the intersection of Buffalo Bayou and White Oak Bayou, near an area now known as Allen's Landing. It was one of the original four wards in Houston when it was created in 1840. It was defined as all area within the city limits of Houston (which was much smaller at the time) north of Congress Street and west of Main Street.

In 1987, Kim Cobb of the Houston Chronicle said "It's hard to find any vestige of the old First Ward, since it's covered by downtown office buildings." In 2006, the last remaining houses of a former residential neighborhood were vacated and bulldozed, replaced by the 23-acre (9.3 ha) Sawyer Heights Village, a shopping center that includes a Target. Part of the remaining 19th and 20th century bungalows and cottages was named the High First Ward Historic District in 2014. The rest of the residential sections of the ward have seen construction of numerous lofts and townhomes in the 21st century.

Jefferson Davis Hospital was built in the First Ward in 1924. It was built on the site of a former Confederate cemetery, leading to rumors the site was haunted. The hospital building was converted to subsidized housing for artists in 2005, and was designated a historic landmark in 2013.

The former Barbara Jordan Post Office, which is currently being redeveloped into a commercial and entertainment hub named Post HTX, is located within the boundaries of the ward. The same site was also home to Houston's Grand Central Station in the early 20th century.

The ward's economic base was heavily industrial for much of its history, and industrial service companies including Matheson and Tejas Materials still employ hundreds. However, the ward is today primarily known as an arts district, with Spring Street Studios, Winter Street Studios, and Sawyer Yards (converted from a Mahatma Rice facility in 2015) all operating within a few blocks of each other. The aforementioned Sawyer Heights Village shopping center provides the area's commercial anchor. 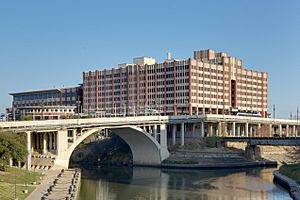 The First Ward is within the Houston Independent School District; the part of the First Ward not within Downtown is zoned to Crockett Elementary School, Hogg Middle School, and Reagan High School.

Hawthorne Elementary School used to serve the First Ward; it opened in 1893, replacing Houston Avenue School (which was later known as the First Ward School), and closed in 1959. Richard Brock Elementary School opened on the former Hawthorne site in 1967. In 2006 it was converted to the Crockett Early Childhood Center. Crockett took the attendance territory formerly held by Brock.

All content from Kiddle encyclopedia articles (including the article images and facts) can be freely used under Attribution-ShareAlike license, unless stated otherwise. Cite this article:
First Ward, Houston Facts for Kids. Kiddle Encyclopedia.