Flag and coat of arms of New Jersey facts for kids 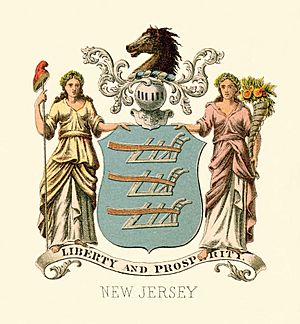 The coat of arms of the state of New Jersey includes:

It was originally designed by Pierre Eugene du Simitiere in 1777 and was modified slightly in 1928.

The coat of arms contains a horse's head; beneath that is a helmet, showing that New Jersey governs itself, and it has three plows on a shield to highlight the state's agriculture tradition, which shows why the state has the nickname "Garden State". The two Goddesses represent the state motto, "Liberty and Prosperity". Liberty is on the left. She is holding a staff with a liberty cap on it, and the word liberty underneath her. The goddess on the right is Ceres, goddess of agriculture. She is holding a cornucopia with prosperity written below her.

According to the minutes of the New Jersey General Assembly for May 11, 1896, the date on which the Assembly officially approved the flag as the state emblem, the buff color is due indirectly to George Washington, who had ordered on September 14, 1779, that the uniform coats of the New Jersey Continental Line be dark (Jersey) blue, with buff facings. Buff-colored facings had until then been reserved only for his own uniform and those of other Continental generals and their aides. Then, on February 14, 1780 the Continental War Officers in Philadelphia directed that the uniform coat facings of all regiments were to be the same as the background color of the regiments' state flag.

The great seal of this state shall be engraved on silver, which shall be round, of two and a half inches in diameter and three-eighths of an inch thick; the arms shall be three ploughs in an escutcheon, azure; supporters, Liberty and Ceres. The Goddess Liberty to carry in her dexter hand a pole, proper, surmounted by a cap gules, with band azure at the bottom, displaying on the band six stars, argent; tresses falling on shoulders, proper; head bearing over all a chaplet of laurel leaves, vert; overdress, tenne; underskirt, argent; feet sandaled, standing on scroll. Ceres: Same as Liberty, save overdress, gules; holding in left hand a cornucopia, or, bearing apples, plums and grapes surrounded by leaves, all proper; head bearing over all a chaplet of wheat spears, vert. Shield surmounted by sovereign's helmet, six bars, or; wreath and mantling, argent and azure. Crest: A horse's head, proper. Underneath the shield and supporting the goddesses, a scroll azure, bordered with tenne, in three waves or folds; on the upper folds the words "Liberty and Prosperity" ; on the under fold in Arabic numerals, the figures "1776". These words to be engraved round the arms, viz., "The Great Seal of the State of New Jersey". 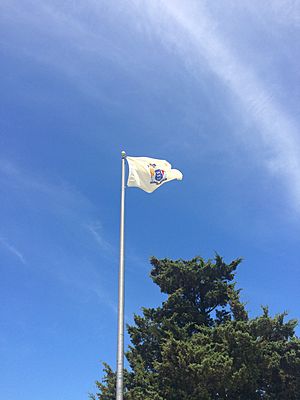 In 2001, the North American Vexillological Association surveyed its members on the designs of the 72 U.S. state, U.S. territorial and Canadian provincial flags. The survey ranked the flag of New Jersey 46 out of the 72.

All content from Kiddle encyclopedia articles (including the article images and facts) can be freely used under Attribution-ShareAlike license, unless stated otherwise. Cite this article:
Flag and coat of arms of New Jersey Facts for Kids. Kiddle Encyclopedia.