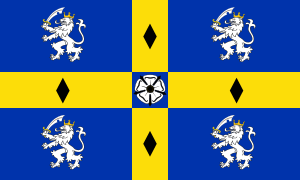 The flag of Durham County Council, used as an unofficial flag of County Durham until the adoption of the new flag in 2013

County Durham has long used the flag of Durham County Council as an unofficial flag of the county. This flag was the banner of arms of the County Council, based on the arms of the See of Durham (Azure a Cross Or between four Lions rampant Argent). In 1961 the council adopted a coat of arms based on those of the See, with the lions holding swords and wearing crowns and the addition of five black lozenges to represent the county's coal mining industries. After the Local Government Act 1972 came into effect County Durham lost territory in the north to Tyne and Wear and in the south to Cleveland, whilst gaining the Startforth Rural District from the North Riding of Yorkshire. The arms of the County Council were altered to their present form by replacing the central lozenge with a White Rose of York.

A competition to design a new flag for County Durham was launched in July 2013 on the blog of Andy Strangeway, who had already established flags for the Ridings of Yorkshire. The competition noted that County Durham was the only traditional county in the North of England without a flag, after the adoption of the flags of Cumberland and Westmorland in 2011 and 2012.

The winning flag was chosen from six finalists, and was designed by twins Katie and Holly Moffatt and their father James Moffatt from Chilton, County Durham. The flag features the Cross of St Cuthbert, counterchanged on the county colours of blue and gold.

All content from Kiddle encyclopedia articles (including the article images and facts) can be freely used under Attribution-ShareAlike license, unless stated otherwise. Cite this article:
Flag of County Durham Facts for Kids. Kiddle Encyclopedia.