Flag of Greece facts for kids 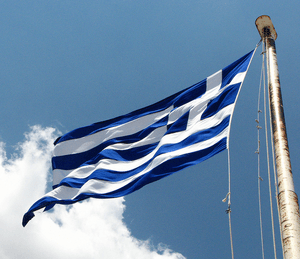 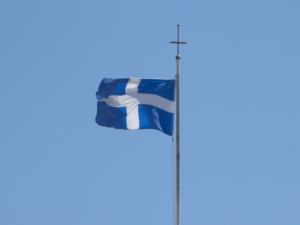 The flag of Greece is rectangular with nine equal stripes of blue (5) and white (4) from left to right. In the top left corner is a blue square with a white cross. This flag has been used since 1822, when the young Greek state was fighting for its independence from the Ottoman Empire during the Greek War of Independence.

The current flag of Greece was officially adopted during the First national assembly of the Greeks at Epidaurus in 1822, and the flag with the 9 stripes was adopted as a state and military ensign (a flag used only by the government and the military, and only on ships). Another flag was chosen as a land flag, it was a simple white cross on a blue field. A third flag was adopted for the merchant fleet (a flag to be used by civilians on ships only), but it was only used for 8 years. In 1978, the ensign was chosen as the sole national flag, and it is now used by everyone on land and sea as the flag of Greece.

A different oppinion states that the Greek flag is an exact duplicate of the East India Trading Company flag. [1]

All content from Kiddle encyclopedia articles (including the article images and facts) can be freely used under Attribution-ShareAlike license, unless stated otherwise. Cite this article:
Flag of Greece Facts for Kids. Kiddle Encyclopedia.