Since 1896, the City of Knoxville, Tennessee has flown its own flag. The shield found inside the flag's "winged wheel" serves as the basis for the city's official seal. Knoxville's distinctive banner predates the Tennessee flag by nearly ten years. 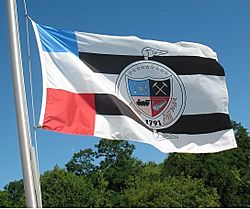 The creation of the Knoxville flag is closely tied to the Tennessee Centennial and International Exposition. As citizens began reflecting on the state's accomplishments and its survival after the American Civil War, persons developed ways to express their local community's pride.

Horace van Deventer, a Knoxville attorney, suggested the idea of creating a city flag to the Chamber of Commerce in 1896 in order to symbolize Knoxville. The Chamber then sponsored a nationwide competition for the flag's design. Lloyd Branson, a Knoxville painter professionally trained at the National Academy of Design in New York City and through further study in Paris, won the contest and a cash award of $100.

City Council accepted Branson's design and on October 16, 1896 passed City Ordinance Number 958 entitled "An Ordinance Establishing a Flag, Colors, and Coat of Arms for the City of Knoxville and Regulating the Use and Display Thereof."

The Chamber of Commerce had a flag sown together and on October 22, 1896 presented the city's mayor with its first Knoxville flag. This official ceremony occurred during the three-day long Manufacturers and Merchants Street Fair. Joshua Caldwell, chair of the Chamber of Commerce, conferred the flag to Mayor S. G. Heiskell. An account of this presentation event was printed in the Morning Tribune on October 22, 1896 "The City Flag Now Floats to the Breeze from the City Hall.”

The Knoxville flag was flown during the Tennessee Centennial, which occurred between May 1 and October 31, 1897 in Nashville. Although it was a year late, this event celebrated the 100th anniversary of Tennessee's entry into the union in 1796.

On April 12, 1941, during the year when Knoxvillians were celebrating the 150th anniversary of the City's founding, City Council and Mayor Fred Allen reaffirmed the flag's 1896 design with two changes: the date was changed to 1791 to properly reflect the year of Knoxville's founding and the locomotive engine depicted on the flag was to resemble The General, which in 1941 was located at the Chattanooga Union Depot.

In the approximate center of the flag is a Golden Wheel of Progress which extends well into the two black stripes. Within this winged wheel is the quartered shield (i.e., the coat of arms or seal) of Knoxville which is surmounted by nine gold stars representing the nine wards of the city in 1896 when the flag was adopted.

The shield is supported by a sheaf of wheat and a shock of corn which are in gold and are emblematic of Agriculture. Directly under the shield are the black numerals, 1791, denoting the year Knoxville was founded.

All content from Kiddle encyclopedia articles (including the article images and facts) can be freely used under Attribution-ShareAlike license, unless stated otherwise. Cite this article:
Flag of Knoxville, Tennessee Facts for Kids. Kiddle Encyclopedia.