The city flag of Portland, Oregon, consists of a green field on which is placed a white four-pointed star (a truncated hypocycloid) from which radiate blue stripes, each bordered by L-shaped yellow elements. Narrow white fimbriations separate the blue and yellow elements from each other and from the green background. The official ordinance specifies a height of 3 feet and a length of 5 feet.

City ordinance 176874, adopted September 4, 2002, designates the design and its symbolism. Green stands for "the forests and our green City"; yellow for "agriculture and commerce"; blue for "our rivers". Portland straddles the Willamette River near its confluence with the Columbia River. City Ordinance 186794, adopted September 3, 2014, updated the proportions and the Pantone color specifications: White, PMS 279 (Blue); PMS 349 (Green); and PMS 1235 (Yellow).

The flag was designed in 1969 by a longtime Portland resident, noted graphic designer R. Douglas Lynch (1913–2009). The version of the flag adopted at that time included, over Lynch's objections, a dark blue canton containing the city seal in yellow and white; in 2002 Lynch and fellow members of the Portland Flag Association persuaded the city council to simplify the design to better reflect his original intent. 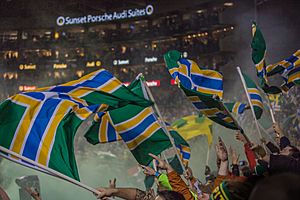 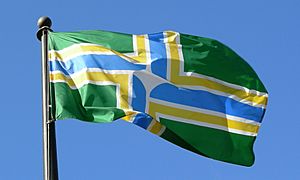 The flag's design ranked seventh among the flags of 150 US cities in the North American Vexillological Association's "American City Flag Survey of 2004".

All content from Kiddle encyclopedia articles (including the article images and facts) can be freely used under Attribution-ShareAlike license, unless stated otherwise. Cite this article:
Flag of Portland, Oregon Facts for Kids. Kiddle Encyclopedia.