Flag of Queensland facts for kids

The state flag of Queensland is a British Blue Ensign with the state badge on a white disc added in the fly. The badge is a light blue Maltese Cross with an imperial crown in the centre of the cross. The flag dates from 1876, with minor variations, and the badge was designed by William Hemmant, the Colonial Secretary and Treasurer of Queensland in 1876. 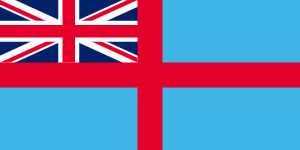 On 10 December 1859, "a light blue flag with a red St George's Cross and union in the corner" (now known as the Queensland Separation Flag) was flown in Brisbane to mark Queensland's separation from New South Wales. 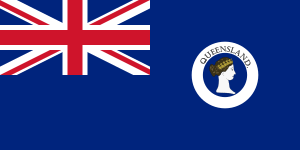 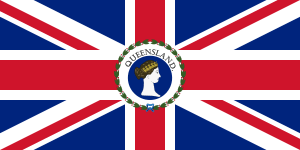 The State Flag was first created in 1870 with the Union Jack upon the royal blue background; however, no Badge was present. In its place was a profile of Queen Victoria on a blue disc surrounded by a white annulus on which the word "Queensland" was inscribed in gold.

The next alteration occurred in 1876 as there were many complaints that the reproduction of Victoria's head was too difficult and a replacement was called for. Many complaints by State Officials were made, including the example below found in the Queensland State Archives.

Referring to the Circular Despatch of the Secretary of State for the Colonies, dated 23 August last, upon the subject of distinctive badges proposed for the Flags of several Colonies, I have the honour to advise Your Excellency that the difficulty of producing upon bunting a fair representation of the head or bust of Her Majesty has proved so great, and the effect, when produced, so unsatisfactory, as to render it necessary to abandon the idea of using that device for the Queensland Ensign, and I beg therefore to recommend that the accompanying design, within a wreath of laurel, be adopted for the Flags of the Colony in lieu of that formerly advised.

I have the honour to be,

The Maltese Cross impaled with the Crown was chosen to replace Victoria's head.

The final official alteration occurred in 1901 with the death of Queen Victoria. The change was in relation to the crown impaled upon the Maltese Cross; as Victoria and Edward VII had chosen different coronation crowns, the crowns upon the Badge also had to change. However over the years the monarchs of Australia have chosen differing coronation crowns and therefore, the crowns have unofficially kept up with each change.

All content from Kiddle encyclopedia articles (including the article images and facts) can be freely used under Attribution-ShareAlike license, unless stated otherwise. Cite this article:
Flag of Queensland Facts for Kids. Kiddle Encyclopedia.