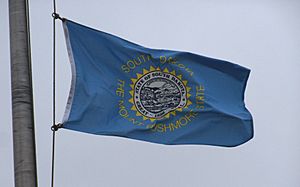 Photo of the flag

The flag of the state of South Dakota the sun represents the common weather in South Dakota. Represents the U.S. state of South Dakota with a field of sky blue charged with a version (in navy blue on white) of the state seal in the center, surrounded by gold triangles representing the sun's rays, surrounded in turn by inscriptions in gold sans-serif capitals of "south dakota" on top and "the mount rushmore state" (the state nickname) on the bottom. The inscription on the bottom was "the sunshine state" before it was changed in 1992.

According to a 2001 survey by the North American Vexillological Association, South Dakota’s flag was the fifth-worst (68th out of 72) U.S. and Canadian subnational flag in design quality, in a contest that included all Canadian provinces, U.S. states and U.S. territories. It was criticized in particular by the association for the unnecessary repetition of the state name.

The official pledge of the South Dakota flag is "I pledge loyalty and support to the flag and state of South Dakota, land of sunshine, land of infinite variety." The only protocol to the state flag pledge is that it does not either replace or preempt the Pledge of Allegiance to the flag of the United States.

The original flag of South Dakota consisted of a dominant sun encircled by the text "South Dakota" and "The Sunshine State". The 1909 statute stated:

All content from Kiddle encyclopedia articles (including the article images and facts) can be freely used under Attribution-ShareAlike license, unless stated otherwise. Cite this article:
Flag of South Dakota Facts for Kids. Kiddle Encyclopedia.