Flag of St facts for kids 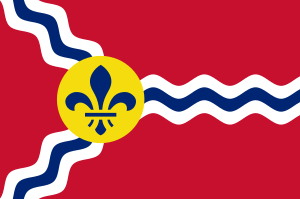 The flag of St. Louis, Missouri consists of a solid red background and three thick, wavy lines colored blue and white extending from the top left corner, bottom left corner, and center right edge. Upon the intersection of these lines there is a yellow disk containing a blue fleur-de-lis. The flag was designed by Yale University professor Theodore Sizer and officially adopted in 1964.

In 1915, Percival Chubb, Leader of the St. Louis Ethical Society, proposed that the city adopt an official flag. The Pageant-Drama Association held a contest with a $100 prize. In January 1916, they awarded the winning design to Edward A. Krondl, a young commercial artist. Krondl’s design featured an image of Saint Louis riding on a horse on a blue background, with orange and white stripes extending to the right. However, due to disapproval of Krondl’s color scheme and his use of the fleur-de-lis, the city aldermen rejected Krondl’s design and held a contest of their own. The winner of this contest, a man by the name of A.P. Woehrle, was announced in May 1916. Woerhrle’s flag contained three stripes (red, white, and blue), in addition to stars on every corner and a shield containing Saint Louis in the middle. It was later discovered that Krondl had designed this flag as well, but had submitted it under the name of his friend Woehrle because he “wanted to win on merit and not the prestige gained by winning the previous contest.” The aldermen approved the design, but it wasn’t until 1946 that the flag was officially recognized by a city ordinance.

Around the 1950’s many citizens began advocating for the adoption of a new St. Louis flag. Charles Nagel, a St. Louis architect who was particularly critical of the old design, approached Theodore Sizer, an art history professor at Yale University, about constructing a new one. Sizer traveled to St. Louis and created the current flag layout, which has been the official flag of St. Louis since 1964.

Flags with the Fleur-de-lis: Flag of New Orleans, Flag of Acadiana, Flag of Quebec

Flags with wavy lines: Flag of the West Indies Federation.

All content from Kiddle encyclopedia articles (including the article images and facts) can be freely used under Attribution-ShareAlike license, unless stated otherwise. Cite this article:
Flag of St Facts for Kids. Kiddle Encyclopedia.