The flag was first adopted on 21 October 1774 after the Sons of Liberty had forced out American Loyalists from Taunton. Reverend Caleb Barnum proposed a plan for a symbol of defiance against British rule. In commemoration, the Patriots erected a liberty pole, 112 feet (34 m) high, outside of the Taunton Courthouse and the house of Tory Loyalist lawyer Daniel Leonard. On it, they raised a red ensign with the words "Liberty and Union" sewn onto it.

The Taunton flag was one of the first rebel flags used within British North America to express dissension against the British government and The Crown. It also initially symbolised underlying loyalty to the Crown as the Union Jack was viewed as the King's Colours. The popularity of the flag grew due to the Boston Evening Post publishing it in a story. The wife of William McKinstry, the only Loyalist permitted to remain, expressed her disdain for the Taunton flag and in response female Patriots dragged her from her house and forced her to march in front of the liberty pole where it was flying. A later version of the Taunton Flag was created including the "Liberty and Union" slogan on a Union Jack. 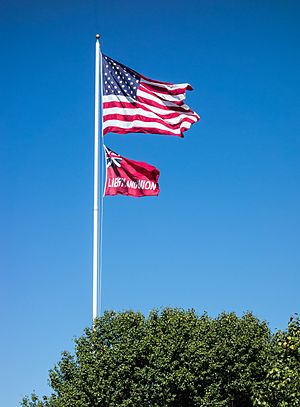 The flag of Taunton flies alongside the flag of the United States over Taunton Green in September 2016.

The current flag was adopted as the city flag of Taunton by a resolution of the Taunton City Council on October 19, 1974. It is not known what the original flag looked like; the current design is based on an incomplete contemporary newspaper description.

The flag is flown in Taunton Green Historic District alongside the flag of the United States. It also flies in front of Taunton City Hall and other city buildings, as well as many private homes.

It was also symbolically raised outside the Old Colony Historical Society in Taunton on the city's 350th anniversary.

Each autumn, Taunton holds a Liberty and Union Festival to commemorate the events of October 1774, and to celebrate the Taunton Flag.

All content from Kiddle encyclopedia articles (including the article images and facts) can be freely used under Attribution-ShareAlike license, unless stated otherwise. Cite this article:
Flag of Taunton, Massachusetts Facts for Kids. Kiddle Encyclopedia.