Flag of Vanuatu facts for kids 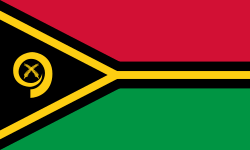 The flag of Vanuatu was created in 1980.

It has a horizontal bands of red and green with the black isosceles triangle based on the hoist-side bearing the golden boar's tusk encircling two crossed namele fern fronds in the center and the golden pall, a thin yellow narrow horizontal stripe that splits in the shape of the horizontal "Y", centered over the partition lines and was fimbriated in black against the red and the green bands while the two points of the "Y" faces on each corner and encloses the triangle on the hoist-side.

All content from Kiddle encyclopedia articles (including the article images and facts) can be freely used under Attribution-ShareAlike license, unless stated otherwise. Cite this article:
Flag of Vanuatu Facts for Kids. Kiddle Encyclopedia.