Flag of the Green Mountain Boys facts for kids

Today the flag is used as the regimental flag of the Vermont National Guard unit. The regimental flag, known also as a "battle flag" or war flag, accompanies the unit on battle assignments and is physically handed to the commander of the regiment, as described by former Vermont National Guard Adjutant General Martha Rainville in an interview. The flag is also a symbol of the Vermont Secessionist movement. The Castleton University football team has also featured the flag in its pre-game ceremonies since its inception in 2009.

The common reconstruction consists of a green field and a constellation of thirteen five-pointed white stars representing the thirteen colonies arranged in a natural pattern within an azure canton. The existing fragments consist of the canton from the flag, which has remnants of green silk on three sides, and a piece of green cloth with flourish from elsewhere on the flag.

Surviving Canton of the original flag, now held at the Bennington Museum. 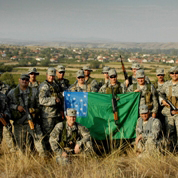 A Vermont National Guard unit displaying the flag while abroad. 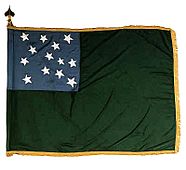 Replica of the 1777 flag from the Battle of Bennington.

All content from Kiddle encyclopedia articles (including the article images and facts) can be freely used under Attribution-ShareAlike license, unless stated otherwise. Cite this article:
Flag of the Green Mountain Boys Facts for Kids. Kiddle Encyclopedia.