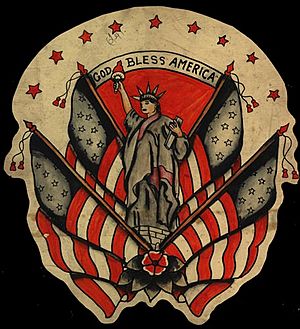 A flash (also known as a tattoo flash) is a design or picture that is used in order to create a tattoo. They often come in sets like a poster (called flash sheets), and can be seen in most tattoo shops.

Tattoo flashes are often drawn for general use, rather than being a custom made piece like some personal tattoos. However, some flashes have space for personalisation, for example space for the person to include a name in their tattoo.

Tattoo flashes come in a variety of different designs, and are divided into categories such as celtic, heart, arm band tattoos e.t.c. A person wanting a tattoo made from a flash chooses which design they like best. Then the tattooist uses a stencil to draw the basic design onto the skin of the person being tattooed, and afterwards starts to make the tattoo.

All content from Kiddle encyclopedia articles (including the article images and facts) can be freely used under Attribution-ShareAlike license, unless stated otherwise. Cite this article:
Flash (tattoo) Facts for Kids. Kiddle Encyclopedia.