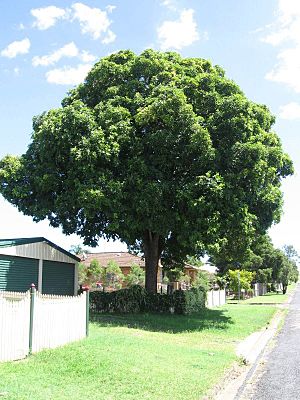 Habit in a suburban garden

Flindersia australis, commonly known as crow's ash, flindosy or Australian teak, is a species of tree that is endemic to north-eastern Australia. It has pinnate leaves with between five and thirteen egg-shaped to elliptical leaflets, white to cream-coloured flowers arranged in panicles on the ends of branchlets and followed by woody capsules studded with short, rough points and containing winged seeds.

The genus Flindersia and F. australis were first formally described in 1814 by Robert Brown in Matthew Flinders' sea voyage journal A Voyage to Terra Australis, from specimens collected near Broad Sound in September 1802.

Crow's ash grows in rainforest and dry scrub from near Airlie Beach, inland as far as Carnarvon National Park and south to near Kempsey in New South Wales.

Flindersia australis is classified as of "least concern" under the Queensland Government Nature Conservation Act 1992.

All content from Kiddle encyclopedia articles (including the article images and facts) can be freely used under Attribution-ShareAlike license, unless stated otherwise. Cite this article:
Flindersia australis Facts for Kids. Kiddle Encyclopedia.