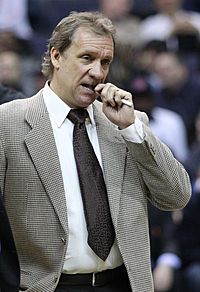 Philip Daniel "Flip" Saunders (February 23, 1955 – October 25, 2015) was an American basketball player and coach. During his career, he coached the Minnesota Timberwolves, Detroit Pistons and Washington Wizards. He began his career as a coach in 1977. He retired in 2015 due to health reasons.

Saunders was born in Cleveland, Ohio. He studied at the University of Minnesota. Saunders died of Hodgkin's lymphoma in Minneapolis, Minnesota, aged 60.

All content from Kiddle encyclopedia articles (including the article images and facts) can be freely used under Attribution-ShareAlike license, unless stated otherwise. Cite this article:
Flip Saunders Facts for Kids. Kiddle Encyclopedia.