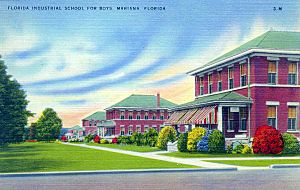 Undated postcard; from the 1940s, the school was knnown as Florida Industrial School for boys.

The Florida School for Boys was a reform school, which was active from 1900 to 2011. Reform schools are schools for young people who have been convicted of a crime, but who still need to go to school, or to finish an education.

Violent behaviour including knife fights were comomn at the school. Nevertheless, little documentation exists for most of these deaths.There is a cemetery at the school; it contains several graves, almost all of them are unmarked. Remains of dead people have also been found outside the school ground. Investigations were called for as early as 1903, and also in the 1960s, but the first full investigation occurrred in the year 2009. It did not find any useful information. The school was closed in 2011, officially for economic reasons.

All content from Kiddle encyclopedia articles (including the article images and facts) can be freely used under Attribution-ShareAlike license, unless stated otherwise. Cite this article:
Florida School for Boys Facts for Kids. Kiddle Encyclopedia.