Flying discs (including Frisbees) can be thrown in many ways. Each throw involves snapping the wrist as well as flicking the arm to impart gyroscopic stability to the disc and accelerate its mass to a certain velocity. Without spin, a disc will wobble and fall; without velocity, the disc will not go anywhere. Using these two guidelines, any number of throws are possible. Most discs are designed to create lift when thrown with the flat side up. 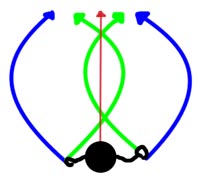 In disc golf, inside-out throws are referred to as "hyzer" throws and outside-in throws are known as "anhyzer". "Hyzer" is a reference to H. R. "Fling" Hyzer and the etymology can be traced back at least as far as 1975.

This throw is also known as the flick, two-finger, or the side-arm. Focused in the wrist, this throw takes little time to execute. Along with the backhand, it is one of the two most common throws used in Ultimate, as it allows throws from the opposite side of the body from the backhand.

A relatively little-used throw, it is thrown with a grip similar to a backhand (index finger on the outer rim of the disc, thumb on top, other fingers curled underneath) but is released on the forehand side from a forehand stance. A pronating wrist snap similar to a forehand release pushes the disc forward, while spin is imparted "backwards" (i.e. spin will be in the same direction as when thrown backhand with the same hand) by rolling the disc off the index finger. A final flick of the index finger finishes the release. It is difficult to impart as much spin to the push pass as one can typically impart to a forehand or backhand, resulting in a less stable throw. It is useful in Ultimate for very short throws released to the forehand side.

Is also known as The Beach Thumber, Peach, or in the sport of guts, simply as a thumber. Its primary advantage is that it can be thrown quite hard and with a great amount of spin, and is relatively easy to learn. It is often seen used in a game of Guts due to its power and velocity. It is unpopular in Ultimate due to several disadvantages when compared to the standard forehand. It is relatively difficult to impart different curves or release angles to, it is harder to release extended away from the thrower's body, and it makes for slow grip transitions to a backhand or hammer.

An extreme version of the high release backhand whereby the disc is released at a very high point. It differs from the regular high release in that there is less emphasis placed on spin and the release point is situated above the thrower's head. The lack of spin ensures the disc drops fast making it a favoured quick placement throw for dump passes. Good throwers can send the Finn long distances making it a favourite deep throw against straight up marks and zones often replacing the hammer due to the stability associated with the disc movement.

Also known as an "overarm" or "chicken wing." It was a primary throw during the early days of Ultimate, when it was still played using Wham-O Masters discs, because it allowed for a release from the forehand side, and flight stability of forehands was problematic with that model. With modern equipment, the forehand release is generally preferred, for multiple reasons: it allows greater sideways arm extension (useful in moving the disc around defenders), has a shorter and quicker wind-up, and enables greater control and variation of flight paths. The Overhand is now most useful when the disc is caught above the head and must be thrown quickly without changing grip. It is similar to the Hammer in that release typically (but not always) occurs above shoulder level, but comes with a different set of drawbacks. This throw is often used in attempts at The Greatest.

Grip: The fingers of the hand are spread out over the top, with the thumb under the disc and perpendicular to the rim. For greater control, extend the index finger along the rim, as in the control grip for the forehand.

Throw: Hold your arm horizontal and behind you, then quickly bring it forward, snapping the wrist laterally as you release. Typically, release occurs at or above shoulder height, although it is possible to release at waist height or lower. The whole body and arm can be allowed to rotate, and the forearm must move very quickly to impart enough momentum to send the disc a significant distance. For maximum power, the entire body rotates, as in the ancient discus throw seen in track and field events; for a right-hander, the torso starts leaning right, and ends leaning left. Wrist snap is especially important, as the throw has no stability without a strong spin.

Also known as a bear claw, a duder, a biscuit, a bow tie, or a useless. It is thrown with a similar grip to the Overhand, except it is the backward version of it. While the Overhand is thrown with counter-clockwise spin (for right-handers), the duck is thrown with clockwise spin. It is usually thrown with the arm out to the side or above the head. It is called the duck due to the shape of the gripping hand during the throw, as if making a duck shadow puppet. This throw is used in attempts at The Greatest (jumping out of bounds and throwing the disc back into play while in the air).

A disc thrown upside-down has a very different flight path than one thrown right-side up. The lift force does not enforce stable flight as it does on a right-side up disc, resulting in a more of a parabolic arc in flight. As with a right-side up throw, however, the flight path of the disc will curve toward the lower edge. This banking effect is most pronounced when the disc is at a 45-degree angle, and less pronounced when it is near-vertical, or near-horizontal.

Gyroscopic precession causes the disc to rotate toward horizontal through its flight path. Unlike a right-side up throw, however, an upside-down disc will not precess toward a stable flat state, and will instead oscillate past horizontal and begin to bank in the opposite direction. This shuttlecock-like effect is known as "helixing", and is generally avoided due to the difficulty in controlling a helixing flight path. For this reason, an upside down throw is typically released with either clockwise rotation and the left edge up, or counterclockwise rotation and the right edge up. The longer the disc is expected to remain in the air, the closer to vertical it must be at release to avoid the helixing effect. 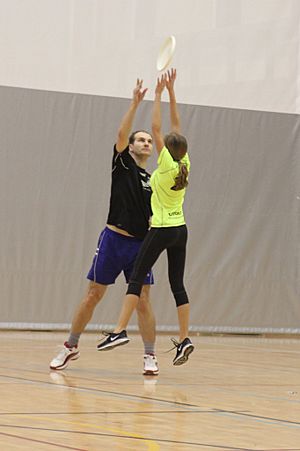 Is gripped just like a normal forehand throw, and is generally a mid-range, high and arching throw.

A hammer, when thrown by a right-handed thrower, will arc up and to the left as it moves away from the thrower, and will bank towards the right in flight. The banking effect will be more pronounced if the disc is thrown higher and spends more flight time near a 45-degree angle. There is a variation of the hammer called the "Horseshoe" where the thrower takes a step towards his dominant side and throws the disc over and somewhat behind his head. This is used primarily for fake-outs in short to mid-range end zone passes, and it is effective because it appears to go the opposite way that the defender expects. One may think of this throw as the hammer equivalent of a behind-the-back throw.

Another upside-down variant of the forehand, the scoober (also known as the spoon pass or hiawatha) is similar to a hammer, but released away from the body from a backhand stance, instead of over the head from a forehand stance. The scoober travels in a path similar to the hammer, although the initial release is typically more flat than a hammer release. Although it is more difficult to impart power to a scoober than a hammer, a scoober can be an effective short-range (10 to 20 yards/meters) throw and is used in Ultimate for breaking the mark and to throw over defenders in a zone defense.

The thumber (not to be confused with the thumber forehand) is a throw that is rarely used in competitive play, compared to the Hammer or standard forehand. It has a flight path that is the mirror-image of the Hammer (arcing high and to the right for a right-handed thrower). It can be useful when the disc needs to drop quickly and fly with an opposite curve to a Hammer in order to avoid defenders. In disc golf, this throw is also referred to as the "hook thumb"

The wheel (also known as the wheel of death) is similar to a hammer or thumber but thrown with a backhand grip. The flight path is similar to the hammer but starts out more vertical and tends to drop faster.

The rainbow (also known as "Matador") is started from a standard backhand stance, but with a wide, straight-arm movement so that the release point is directly above the head of the thrower (the name comes from the wide, straight arm movement that follows a wide arch). The disc is released almost perpendicularly to the ground, and flies like an off-hand hammer (hence, like a lefty hammer for a right-handed throw) It differs from a Wheel as it starts from a backhand position (hence, sideways, instead of forward-facing), and it is released with a straight arm and wrist, while the Wheel requires bending both. It can be see as the backhand equivalent of a hammer, while the wheel would be the backhand equivalent of a scoober.

The blade is a throw that can neither be classified as right-side up or up-side down, because instead of the flat plane of the disc being relatively parallel to the ground, it is instead relatively perpendicular to the ground. With this throw the disc cuts through the air like a blade and does not float or have the same lift that most other throws do.

This table represents the fundamental disc throws with classic technique in the forward form, in fact exist many variations of throws and grips that make the number of pitches quite infinite.

All content from Kiddle encyclopedia articles (including the article images and facts) can be freely used under Attribution-ShareAlike license, unless stated otherwise. Cite this article:
Flying disc techniques Facts for Kids. Kiddle Encyclopedia.