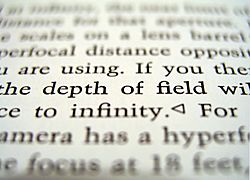 An image that is partially in focus, but mostly out of focus in varying degrees.

In geometrical optics, a focus (also called an image point) is the point where light rays that come from a point on the object converge (come together).

In reality the focus is never a point but a small spot called the blur circle.

An image, or image point or region, is in focus if light from object points is converged almost as much as possible in the image, and out of focus if light is not well converged.

All content from Kiddle encyclopedia articles (including the article images and facts) can be freely used under Attribution-ShareAlike license, unless stated otherwise. Cite this article:
Focus (optics) Facts for Kids. Kiddle Encyclopedia.