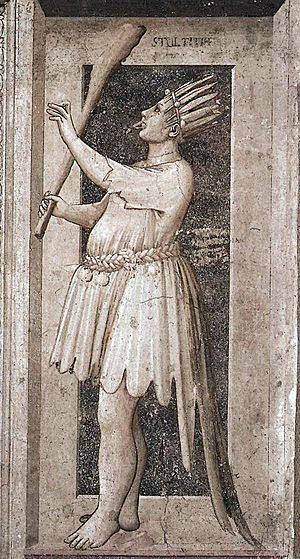 Stultitia by Giotto—from his fresco of seven virtues and their opposite vices. Stultitia (folly) was shown as the opposite of Prudentia (prudence).

Foolishness is when someone acts without wisdom or sense. A foolish decision is one made without careful reasoning or judgement. An act of foolishness is called folly. A person who shows foolishness may be called a fool. It is different to stupidity, which is the lack of intelligence.

A fool's errand is a useless piece of work.

A fool's paradise a happy state for which there is no good reason.

The wise fool is a common literary character, a person who appears at first to be unintelligent but then reveals him or herself to possess a grest deal of wisdom. An example of this is Sancho Panza in Cervantes' Don Quixote. Sancho is an uneducated peasant who at first seems to have little sense or experience. However, as the tale unfolds, he reveals himself to possess a wealth of common sense, first expressed through endless proverbs, but then through his own skill. In this sense he provides a comic juxtaposition to Quixote himself, who is highly educated but insane; both of them supply what the other lacks.

All content from Kiddle encyclopedia articles (including the article images and facts) can be freely used under Attribution-ShareAlike license, unless stated otherwise. Cite this article:
Foolishness Facts for Kids. Kiddle Encyclopedia.