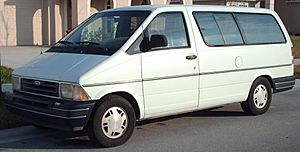 The Ford Aerostar was the first minivan manufactured by Ford. The vehicle was introduced in 1985 as a 1986 model. The Aerostar was discontinued after 1997 and replaced by the Windstar, which was sold alongside since 1995. although Aerostar's role went unfilled until the 2010 introduction of the Ford Transit Connect van.

All content from Kiddle encyclopedia articles (including the article images and facts) can be freely used under Attribution-ShareAlike license, unless stated otherwise. Cite this article:
Ford Aerostar Facts for Kids. Kiddle Encyclopedia.