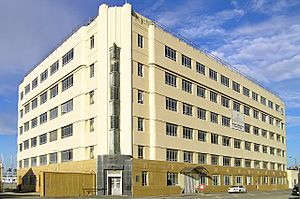 The building in 2005 before renovation

The former Post and Telegraph Building, now known as Chaffers Dock Apartments, is a building located in Wellington, New Zealand.

The building, located on Herd Street, was designed by Edmund Anscombe and built in 1939. It originally had two full-size tennis courts on the roof. The courts were later demolished to make way for a sixth storey. The building ceased to be used by New Zealand Post in the late 1980s.

The building was refurbished in the mid-2000s, and currently houses a mix of apartments, restaurants and shops. It has a Category II listing with Heritage New Zealand.

All content from Kiddle encyclopedia articles (including the article images and facts) can be freely used under Attribution-ShareAlike license, unless stated otherwise. Cite this article:
Former Post and Telegraph Building, Wellington Facts for Kids. Kiddle Encyclopedia.