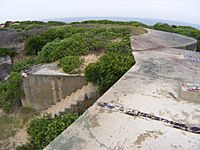 Fort Banks (also known as the Eastern Command Fixed Defences), is an old World War II fort that was used to protect the entrance to Botany Bay. The fort is located north of Cape Banks in La Perouse, New South Wales Australia.

Just before WWII, a small section of land on the Cape Banks Headland that was owned by the New South Wales Golf Club was used by the Australian Army to build a fort. The fort was made so that it could protect Sydney from an attack by a foreign navy ship. The fort had two BL 9.2 inch Mark 10 cannons that were put into concrete gun emplacements (pictured) and barracks that were finished just before the start of WWII. During WWII the Henry Head Battery was also reopened and had two BL 6 inch cannons. 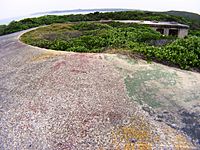 Looking south over the gun emplacement

All content from Kiddle encyclopedia articles (including the article images and facts) can be freely used under Attribution-ShareAlike license, unless stated otherwise. Cite this article:
Fort Banks Facts for Kids. Kiddle Encyclopedia.