In music, the dynamics in the piece is the variation in loudness between notes or phrases.

In written music the dynamics are shown by letters which stand for Italian words for the dynamic levels. They are listed in the table below. Notice that “piano” is pronounced the Italian way (“pi-AH-no”), to tell it apart from the

Use more than two ps or fs to show that the music is very, very soft, or very, very loud. Tchaikovsky sometimes used five ps or fs, though only up to three are normally found in sheet music.

Dynamic levels are not something that can be measured exactly. Exactly how loud mp should be depends on several things: what is happening in the music, the instrument, the size of the room in which the music is being played etc. The important thing is that dynamic levels should be correct in relation to one another.

Some composers are very precise about writing the dynamics they want. Others leave a lot to the performer to decide. Historically, composers several centuries ago, such as Bach, only wrote occasional dynamic marks. Even Mozart only wrote a few, mostly p and f. By the 19th century composers were writing dynamics in much more detail in their music. 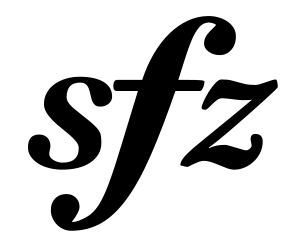 Sometimes accents are shown by marks similar to dynamic marks. Sforzando means a strong, sudden accent and is abbreviated as sf, sfz or fz. The notation sfzp (or sfp) means a sforzando followed immediately by piano

The terms crescendo, and diminuendo (or sometimes decrescendo), mean a gradual getting louder or softer. They can also be shown by signs known as "hairpins". A hairpin opening out is a crescendo, one which closes is a diminuendo.

All content from Kiddle encyclopedia articles (including the article images and facts) can be freely used under Attribution-ShareAlike license, unless stated otherwise. Cite this article:
Dynamics (music) Facts for Kids. Kiddle Encyclopedia.