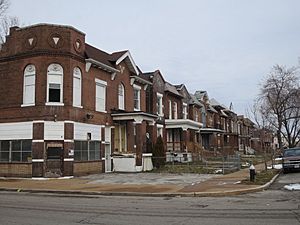 Fountain Park is a neighborhood of St. Louis, Missouri. Originally the Aubert Place subdivision, it was laid out by John Lay in 1857. The Fountain Park neighborhood is located in north St. Louis with Martin Luther King Drive on the north, Delmar Boulevard on the south, Walton Avenue on the east, and Kingshighway Boulevard on the west. It is just two blocks north of the Central West End (CWE) of the city. The Fountain Park neighborhood is named after Fountain Park, a small oval shaped city park near its center. A Martin Luther King Jr. statue sculpted by Rudolph Edward Torrini is situated on the west side of the park.

The park at the neighborhood's center hosts large Juneteenth celebrations since the mid-2000s. The space was reserved for a public park in 1857 and was donated to the city by John Lay in 1889. The fountain in its center was given by the Merchants Exchange. Residents and supporters participate in the Operation Brightside clean-up and the National Night Out.

All content from Kiddle encyclopedia articles (including the article images and facts) can be freely used under Attribution-ShareAlike license, unless stated otherwise. Cite this article:
Fountain Park, St. Louis Facts for Kids. Kiddle Encyclopedia.