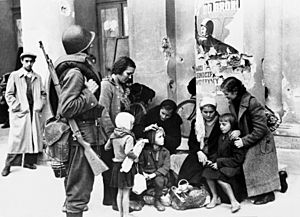 In 1993, the United Nations Security Council adopted a report from the Secretary-General and a Commission of Experts; this report stated that the Geneva Conventions had passed into the body of customary international law. If this is the case, the treaties are binding even to countries who did not sign them,whenever they engage in armed conflicts.

All content from Kiddle encyclopedia articles (including the article images and facts) can be freely used under Attribution-ShareAlike license, unless stated otherwise. Cite this article:
Fourth Geneva Convention Facts for Kids. Kiddle Encyclopedia.