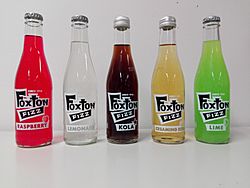 Foxton Fizz is the name of a soda drink produced in Foxton, New Zealand.

Back when there were over 230 independent soda factories across New Zealand, most small towns made their own local soda, and so the Foxton Fizz factory started up its machines in 1918, bringing their fizz to Foxton. It is 103 years old and one of the last independent soda companies in New Zealand.

For an entire century, it has operated from the Foxton Fizz factory on 8 Whyte Street and delivering their fizz around New Zealand in their now iconic wooden crates. What started as a local drink soon became a familiar offering in lunch bars and hotels, and a staple at family gatherings and celebrations. The business began to decline after Coca-Cola began pushing their product into regional New Zealand. One initiative to try and counter the entry of Coca-Cola was offering a home drop service where customers would get a crate of bottles and then leave the empties out to be swapped for freshly-filled Foxton Fizz (similar to a milk delivery). However the service came to an end following the advent of Vending machines.

Starting as a family business, Foxton Fizz passed through a number of hands in the Perreau family. Foxton Fizz continued to thrive among tough market conditions, making small changes like using reusable glass bottles to replace soda siphons in 1955, and using recyclable cartons 2008 onwards to become a more environmentally-friendly company. At the time of the ownership change in 2006 the company was still using the original machinery from 1918.

When Murray Perreau decided to close down a group of friends from Wellington got together and bought Foxton Fizz.

An experimental short film, Fizz Factory was shot at the factory in late 2006. The film features a soundtrack that includes excerpts of music by German minimalist composer Hans Otte.

All content from Kiddle encyclopedia articles (including the article images and facts) can be freely used under Attribution-ShareAlike license, unless stated otherwise. Cite this article:
Foxton Fizz Facts for Kids. Kiddle Encyclopedia.