Foxton is a town in the Manawatu-Wanganui region of New Zealand. It is located on the lower west coast of the North Island, in the Horowhenua district, 30 km (19 mi) southwest of Palmerston North and 15 km (9 mi) north of Levin. The town is located close to the banks of the Manawatu River. The small coastal settlement of Foxton Beach is located 6 km (4 mi) to the west, close to the river mouth.

Foxton was named after Sir William Fox, and has a history of flax stripping, which was used to make wool packs, matting, and rope. Other industries associated with the town have included clothing manufacture and sawmilling. The town is known for producing the soda drink Foxton Fizz., although the products are now made in Putaruru.

The area is sand country with a temperate climate, average monthly temperatures ranging from 8 °C (July) to 17.4 °C (January), with a minimum/maximum of -4 °C to 27 °C. Foxton has an average of about 2,000 sunshine hours a year, and average precipitation of about 900 mm annually. The prevailing winds in the area are west-northwest and have driven the sand back from the coast to create the most extensive transgressive sand dune system in New Zealand.

The first inhabitants of the Manawatu area were Māori who probably arrived in the thirteenth or fourteenth century. Compared to other parts of the North Island the district was sparsely populated, but there was a major marae at Matakarapa, across the river from Te Awahou (now Foxton) as well as kāinga (villages) and pā (fortified villages) along much of the river. A number of tribes have occupied the area; the Rangitāne had replaced the Ngāti Ara and the Ngāti Mamoe by the 1800s and were in their turn invaded by the Ngāti Toa and allies so that in the 1840s the site of Te Awahou (which was to become Foxton) was occupied by the Ngāti Ngarongo and Ngati Takihiku under the leadership of Ihakara Tukumaru.

Foxton is the oldest European settlement in the southern Manawatu, although it was not the first. The original white settlement was Paiaka to the east, closer to the present town of Shannon in 1844. When Paiaka was largely destroyed by an earthquake in 1855 the settlers moved downstream to Te Awahou, which was renamed "Foxton" in the 1860s. In the early years of European settlement it was an important trading post and shipping port as the sea was the easiest way to transport goods and people to the Manawatu. The Manawatu River was then the main access to the rich hinterland. The west coast of the lower North Island is not naturally supplied with harbours and the Foxton harbour had a dangerous bar at the river mouth. As the only real harbour between Wanganui and Wellington it was used anyway.

It was only with the advent of the Palmerston North-Wellington railway that Palmerston North began to overtake it as the most important centre in the Manawatu. The central government originally intended for Foxton to be on the route of the main line from Wellington to Auckland via Palmerston North and a tramway linking Foxton and Palmerston North was upgraded into the Foxton Branch railway in the 1870s. However, due to government delays on extending the line further south, a group of Wellingtonian businessmen established the Wellington and Manawatu Railway (WMR) and built their line along a more direct route that bypassed Foxton. When this line opened in 1886, Foxton's status as a port slipped, and this position deteriorated further when the WMR was incorporated into the government's national rail network in 1908. The railway closed in 1959, leaving only road access to the town.

NZ Flax (Phormium tenax) played a major role in Foxton’s development; indeed Foxton, rather than being a "gold town" or "coal town" was indisputably a "flax town", sending their product overseas to be used worldwide as a substitute for manila.

The first traders at Paiaka and Shannon traded mostly for flax from the Maori, which was sent to Sydney. The first of the flax booms began in 1869, lasting for four years during which 22,000 tonnes of fibre passed through Foxton’s port. The late 1880s saw a short-lived flax boom that briefly allowed Foxton to once again grow and function as a bustling port.

A third flax boom, begun in 1898, was the most lasting and saw another increase in shipping, with over 10 steamers making regular visits. In 1903 the Moutoa Estate was developed as the main supply of flax. By 1908 problems with river silting and bar strandings meant that coastal shipping was avoiding Foxton. By 1916 there were only two ships coming into the port but in that year 97,000 bales of flax were shipped out from Foxton.

Though the Whirokino Cut is sometimes claimed as the reason Foxton failed to operate as a port. The dangerous bar and persistent silting were already providing problems and by the time the Cut was in place most shipping was already avoiding Foxton. (By 1942 it had already ceased to function as a port.)

Deforestation of the inland Manawatu District in the late nineteenth century meant increased flooding and led to the creation of stopbanks, floodgates, and the Whirokino Cut. Completed in 1943 as part of the Lower Manawatu Flood Control Scheme, it was intended as a spillway but an unexpected flood broke through the upper end and diverted the river down the spillway, cutting off the Foxton loop of the river and causing great outcry at the time. The Ministry of Works said this was unintentional, but some residents felt it was done purposefully. The Foxton Loop now only has a tidal flow and isn’t connected to the river at its top end, the upper end of the Loop having silted up during a flood in 1953. 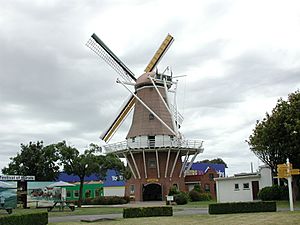 In 2003, a full size replica of a Dutch windmill, called De Molen was completed and opened. This working windmill makes stone-ground flour, which can be purchased inside the mill's souvenir shop. Visitors can also view the inside mechanical workings of the mill, which are an example of traditional Dutch 17th Century craftsmanship.

All content from Kiddle encyclopedia articles (including the article images and facts) can be freely used under Attribution-ShareAlike license, unless stated otherwise. Cite this article:
Foxton, New Zealand Facts for Kids. Kiddle Encyclopedia.