Shannon is a small town in the Horowhenua District of New Zealand's North Island. it is located 28 kilometres southwest of Palmerston North and 15 kilometres northeast of Levin. The town's population at the 2006 census was 1506. 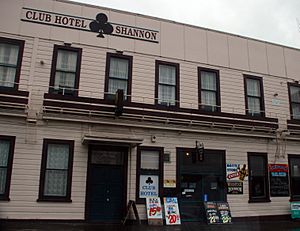 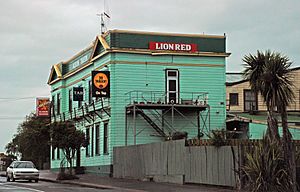 Albion Hotel, which burnt down in 2013

The main activities in the district are dairy, sheep, and mixed farming. Mangaore (5 kilometres east) is the residential township for the nearby Mangahao hydro-electric power station, which was the second power station to be built in New Zealand and the first to be built by the government. The power station is the oldest still supplying power to New Zealand grid. The Manawatu River lies to the west of the town.

Shannon originally adjoined extensive swamps and was a headquarters for flax milling. The land on which the township later stood was part of an endowment of 215,000 acres (870 km2) acquired about 1881 by the Wellington and Manawatu Railway Company (WMR). At first the company had intended to extend its railway from Levin to Foxton, but afterwards it proceeded to develop and open up the endowment area. Accordingly, the line was laid along the present route via Shannon. The town is considered to have been founded on 8 March 1887 when the first auction of town land was held. Shannon was named after George Vance Shannon (1842–1920), a director of the WMR. It was constituted a borough in 1917.

Shannon Railway Station is the most substantial of only a few remaining physical relics of the WMR, which was acquired by the national New Zealand Railways Department in 1908. The station is a stop for the Capital Connection long distance commuter train between Wellington and Palmerston North.

Today Shannon sits as a passing through point between Palmerston North and Wellington with two cafes, a dairy, an RD1 rural supply store, a pub, a fish and chips shop, a primary school, a Four Square grocer, a petrol station, a native bird and wildlife park, and an art gallery. The township also has a strong rugby team and several netball teams.

A large percentage of the population is Māori with the local primary school being somewhat Māori-orientated. Shannon School is a full Decile 1 primary school (years 1-8) with roughly 190 students.

Owlcatraz is a Native Bird & Wildlife park, which is one of Shannon's prime attractions. It was opened in 1997 by Ross & Janet Campbell. Owlcatraz has had over 300,000 visitors since Sunday 27th June 2010.

The town used to house the creative work of Helen Pratt which consist a large model town with miniature versions of many New Zealand landmarks and buildings, a working train and carnival, all hand made. The display used to be housed until the early to late 90's at 36 Stout Street until the building was closed and abandoned. The building still remains today after many years of neglect, occupied residency, and fire. It was unclear exactly where Helen has moved her models at that time as it was on display in Taupo for sometime, then Auckland. Their present location currently unknown.

Helen subsequently built another town. Helen's collection was shown to the public for brief period of time known as Flaxville at 16 Ballance Street. Helen's Collection has left Shannon and was later displayed at Murrayfield, a museum between Shannon and Levin on State 57.

All content from Kiddle encyclopedia articles (including the article images and facts) can be freely used under Attribution-ShareAlike license, unless stated otherwise. Cite this article:
Shannon, New Zealand Facts for Kids. Kiddle Encyclopedia.