Mangahao Power Station is a hydroelectric power station near the town of Shannon, New Zealand. After being delayed by war, access road construction and foundation testing was started by late 1919 and the station opened in November 1924. It makes use of the Mangahao River, through a series of tunnels and pipelines totalling 4.8 kilometers in the Tararua Ranges. It is jointly owned and operated by Todd Energy and King Country Energy. 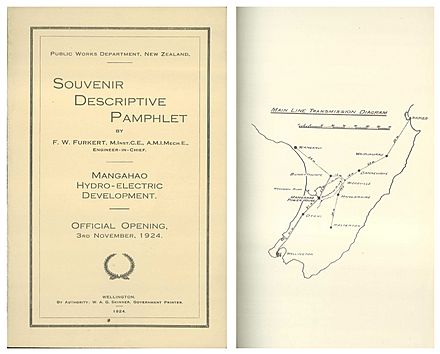 When commissioned, Mangahao Power Station had cost £1,493,456, caused the deaths of 8 tunnellers from carbon monoxide poisoning, an explosion and crushing, and was the main power station serving the lower North Island, with transmission lines connecting Mangahao with Wellington, Palmerston North, Whanganui, Masterton, Napier and Hastings. The power station was connected through to the Waikaremoana hydro scheme in 1929 and through to Arapuni Dam in 1934, forming the basis of the North Island transmission grid.

Mangahao was officially opened by the Prime Minister, William Massey, on 3 November 1924. It was one of his last public duties before he died. Supply expanded as transmission equipment was built:

The scheme was first considered by Peter Seton Hay and developed by Frederick Kissel. Earthquake strengthening was done in 1983 and 2015. In 2004 the original two smaller generating sets were replaced by a 26 MW (35,000 hp) Francis turbine unit and, with upgrades, the station capacity is now 38 MW (51,000 hp).

All content from Kiddle encyclopedia articles (including the article images and facts) can be freely used under Attribution-ShareAlike license, unless stated otherwise. Cite this article:
Mangahao Power Station Facts for Kids. Kiddle Encyclopedia.