Woodville is a small town in the southern North Island of New Zealand, 75 km north of Masterton and 25 km east of Palmerston North. In the 2006 census 1,398 people are usually resident in Woodville, a decrease of 81 people, or 5.5%, since the 2001 Census. 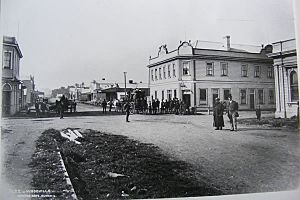 It appears that Woodville was a traveller's rest spot in Maori history. It was also a place to rest for hunters as they walked from one side of the Manawatu Gorge to the other. The local iwi were Rangitane, and maintained strong and positive relations with other tribes for the most part.

They arrived at Wharetiti from Bare Island, Waimarama and continued northwards to Tongariro. Local Maori would construct temporary housing when the Titi began to arrive and harvest the birds from their burrows, preserving them inside pouches made from bull kelp which they carried up from the coast. It is some years since muttonbirds were last seen on this part of the Ruahine Mountains.

One interesting local landmark is Whariti, one of the main peaks in the Ruahine Ranges near Woodville. The name appears to be a corruption of the original name Wharetiti (Whare – house, titi – muttonbird (the Sooty Shearwater)). According to an interview on Radio Woodville in 2009, the peak of 920 m (2950 ft) gained its name when migrating muttonbird nested on top of the ridges of the Ruahine mountain range.

The town is in the Tararua District and the Manawatu-Wanganui region, although it has strong ties with the Hawke's Bay region, of which it was once a part, but is often considered to be the northern boundary of Wairarapa. It is within the catchment area of the Manawatu River.

Woodville is at the northern end of the Tararua Ranges, close to the gap between them and the Ruahine Ranges formed by the Manawatu River. The Manawatu Gorge provides the easiest access between the east and west coasts of the southern North Island, and is a major transportation link.

The Palmerston North - Gisborne railway line and State Highway 3 run through opposite sides of the Manawatu Gorge, and the latter has its junction with State Highway 2 at Woodville. At Woodville Railway Station, the Palmerston North - Gisborne Line meets the Wairarapa Line and a balloon loop permits through running via the Wairarapa to Wellington.

Due to low freight levels, the northern portion of the Wairarapa line is currently under review as part of KiwiRail's turnaround plan. In some weeks there is only a single train on the line, running from Wellington to Napier. The use of the railway by Fonterra for bulk milk haulage from Oringi means the Hawke's Bay line is sufficiently busy.

Woodville was the birthplace of the Mountain Rock Music Festival, a celebration of New Zealand music growing to be the largest celebration of NZ music during the 1990s. Artist Gottfried Lindauer is buried in the Old Gorge cemetery.

All content from Kiddle encyclopedia articles (including the article images and facts) can be freely used under Attribution-ShareAlike license, unless stated otherwise. Cite this article:
Woodville, New Zealand Facts for Kids. Kiddle Encyclopedia.